A Gemini Large and Long Program

Supermassive black holes (BHs) are essential components of galaxies - they regulate galaxy properties and impact star formation via feedback processes, dynamically influence the shape of galaxies, and give rise to exotic phenomena such as the ejection of high-velocity stars. About 100 BH mass measurements in nearby galaxies have been built up over the past two decades, leading to the establishment of tight correlations between the mass of a central BH and its host galaxy’s large-scale properties. Our understanding of the underlying physics driving the empirical relations, however, is limited by the present sample of galaxies. In particular, dynamical BH mass determinations have been preferentially made in galaxies with small sizes at a given luminosity relative to the local galaxy population.

Our large program addresses this troublesome bias using Gemini NIFS behind laser guide star (LGS) adaptive optics (AO), complemented by HST imaging observations and large-scale integral field spectroscopy, to detect and weigh BHs in 31 nearby galaxies. By specifically targeting those galaxies with sizes and luminosities that are currently not well represented in the existing sample of BH mass measurements, we will obtain a more complete census of local BHs in a wide range of galaxies with diverse evolutionary histories. Forgoing the approach that we have used for years of measuring a few BHs at a time, and instead examining large, homogenous datasets of carefully selected samples is the ideal way to achieve a breakthrough in our understanding the co-evolution of BHs and galaxies.
Black Holes in Compact, High-dispersion Galaxies

Through a large spectroscopic survey with the Hobby-Eberly Telescope (van den Bosch et al. 2015), we have uncovered a sample ideal for studying the upper end of the BH-galaxy relations. These rotating, early-type galaxies have small sizes (Re ~ 1−3 kpc) and luminosities (∼10^11 L_⊙,K) for their large central stellar velocity dispersions (> 250 km/s). The objects are notably distinct from the giant ellipticals and BCGs expected to house the most massive BHs in the Universe. Using AO Gemini NIFS observations within the BH sphere of influence and stellar-dynamical modeling, we detected BHs with masses of (3 − 5) × 10^9 M_⊙ in NGC 1271 (Walsh et al. 2015), NGC 1277 (Walsh et al. 2016), and Mrk 1216 (Walsh et al. 2017). These galaxies host some of the largest BHs detected to date, and are significant positive outliers from the BH mass − bulge luminosity relation. Interestingly, these compact, high-dispersion galaxies appear quite similar to the typical z ∼ 2 quiescent galaxies (Yildirim et al. 2017), and could be relics, having experienced passive evolution since that time. Thus, NGC 1277-like galaxies could reflect a previous era when the local BH mass − bulge luminosity relation did not apply, galaxies instead contained over-massive BHs, and the growth of host galaxies had yet to catch up. In other words, maybe BH growth occurs prior to galaxy growth.

In addition to measuring BH masses, we are also using large-scale integral field unit observations to learn about the stellar populations in the galaxies and the associated dark matter halos (Yildirim et al. 2015, 2016).
Stellar and Gas-dynamical Consistency Tests 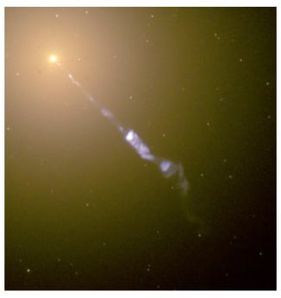 Some of the compact, high-dispersion galaxies found through the Hobby-Eberly Telescope survey exhibit regular, well-defined nuclear dust disks in HST I-band imaging. Such dust morphology suggests the presence of cleanly rotating molecular gas, from which it may be possible to derive an independent BH mass measurement. Using ALMA observations, we are examining the spatial/kinematic structure of the molecular gas disks and are constructing dynamical models that fit to spatially resolved kinematics. Similar work on NGC 1332 (Barth et al. 2016) revealed a 6.64 × 10^8 M_⊙ BH, which is highly inconsistent with the prior stellar-dynamical BH mass from AO observations (Rusli et al. 2011).

NGC 1332 is one of a very small number of galaxies for which both stellar and gas-dynamical BH masses have been made. Surprisingly, nearly all of the other direct comparison studies result in similar discrepancies. For example, M87 is a crucial anchor for the uppermost end of the BH relations. Even with HST STIS observations, which constrained the previously uncertain gas disk inclination angle, and dynamical models that explored the effect of turbulent velocity dispersion, our gas-dynamical BH mass (Walsh et al. 2013) is a factor ∼2 smaller than the most recent stellar-dynamical mass (Gebhardt et al. 2011). Likewise, the stellar-dynamical determination exceeds the gas-dynamical BH mass (de Francesco et al. 2006) for NGC 3998 by a factor of ∼3. For NGC 3998, we used Keck OSIRIS+AO observations to map the stellar kinematics within the BH sphere of influence, and dynamical models that, for the first time, considered effects on the BH mass from both a dark halo and assumptions about the galaxy’s intrinsic shape (Walsh et al. 2012). These results highlight the need for carrying out cross-checks between the stellar and gas-dynamical methods. With such a limited sample, conclusions cannot be made regarding the consistency of the two techniques and the subsequent effects on the BH correlations.
Studying the AGN Broad-line Region with Reverberation Mapping

Reverberation mapping (RM) uses the time domain to resolve the broad-line region (BLR) in active galactic nuclei (AGN). The main idea is that the BLR gas varies in response to continuum fluctuations originating from the nuclear photoionizing source. The time delay between the continuum and broad line variations provides information about the size of the BLR, which can be combined with the broad emission line velocity width to infer the BH mass.

With the Lick AGN Monitoring Project (LAMP) in 2008, we were able to measure the masses of nine black holes, which significantly increased the number of reverberation-based masses at the low end of the AGN mass and luminosity regimes (Bentz et al. 2009, Walsh et al. 2009). We were also able to measure velocity-resolved time lags for six of the AGNs and a velocity-delay map for one object (Bentz et al. 2010). Such measurements provide information about the BLR geometry and kinematics, which are important for understanding the origins of the BLR and the systematics in reverberation-mapped masses. We conducted two additional RM campaigns at Lick Observatory in 2011 (e.g., Barth et al. 2011, 2013) and 2016.